Fizz Buzz is a game used as an aid in teaching children about division.  In addition, writing code to implement an automated version of Fizz Buzz has become a popular test of basic computer programming skills.  Subject matter experts say that if one cannot write a basic Fizz Buzz program in 15 minutes or so, chances are their coding skills are probably somewhat lacking.

Having spent a number of years back in the day as a software developer, I decided to try my hand at writing a Fizz Buzz program.  I actually did get a basic version working in less than an hour in spite of my typos and programming language syntax errors.  It took a bit longer to “beautify” it and make it fit for public consumption. 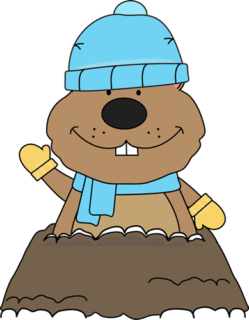 Punxsutawney Phil saw his shadow today, so we can look forward to six more weeks of winter.

Potomac Phil, his “stuffy” counterpart here in the DC Metropolitan Area, concurred and had this to say: “Sorry folks six more weeks of winter and six more months of political gridlock!!!”  Based on the current political environment, six weeks of gridlock may be a very conservative estimate!

Groundhog image courtesy of MyCuteGraphics.com. It is subject to the usage terms and conditions cited therein.