Many years ago, I went to work for a company which at the time was a wholly-owned subsidiary of Computer Sciences Corporation (CSC).  A few months after I joined, we were absorbed into the parent company and became known as the CSC Systems Division.  This division of CSC provided systems, software and services to various and sundry US Federal Government agencies.  CSC’s Systems Sciences Division (SSD) was doing the same for NASA.

In the early 1990s, CSC, along with many others, entered the Outsourcing business.  They formed the Technology Management GROUP (TMG) to provide outsourcing services for commercial, rather than government entities.  the motivation for this was twofold: 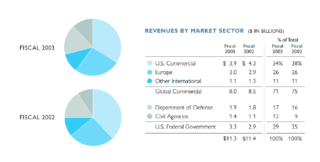 CSC’s foray into outsourcing became quite successful over the next 10 years or so.  They also became a player in the banking and insurance software business via acquisitions during this period.  By 2003, commercial revenue had outpaced government-related revenue by a substantial margin.

In 2015, CSC split into two different companies.  This resulted in formation of a new company known as CSRA, reflecting the merger of CSC’s government contracting organizations and SRA, another top tier government contractor.  CSC retained the outsourcing and other commercial business.

In 2017, CSC merged with Hewlett Packard Enterprise (HPE) to form DXC.Technology.  An interesting aspect of this merger is that HPE was the result of HP’s acquisition in 2008 of Electronic Data Systems (EDS).  Back in the day, CSC and EDS were, to put it nicely, fierce competitors.

And they’re not done yet!  On February 12, 2018, General Dynamics (GD) announced plans to buy CSRA for about $6.8 billion.  Another interesting bit of trivia: GD was CSC’s first big outsourcing deal.  I don’t know if the deal is still in place with DXC.Technology, but wouldn’t surprise me if it was.

Disclaimer: This reflects my view of the events discussed above.  Any errors, omissions or false news contained in this post are unintentional and done with no malice aforethought. 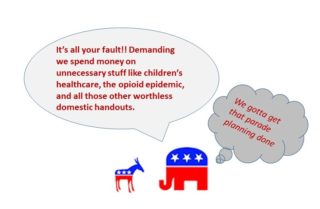 In the wee hours of this morning, Congress passed its latest Funding Bill, which will keep the US Government in business a bit longer.  POTUS45 signed the bill and once more took to Twitter to give us his thoughts on the proceedings:

Without more Republicans in Congress, we were forced to increase spending on things we do not like or want in order to finally, after many years of depletion, take care of our Military. Sadly, we needed some Dem votes for passage. Must elect more Republicans in 2018 Election!