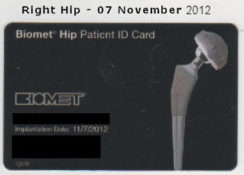 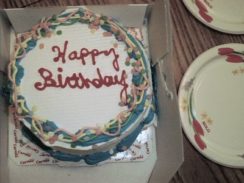 Belated Happy 5th Birthday to my bionic right hip.  I had the surgery on the day after the 2012 Presidential Election (Wednesday, 07 November 2012). It’s gone through countless miles on the treadmill and exercise bike along with all of the daily stuff that requires its services.  And it has yet to register any complaints.

My bionic right hip is four years old today. I had the surgery the day after the 2012 Presidential Election.

If you are reading this post, you probably know whether your candidate will be President of the United States for the next four years (unless there is another outbreak of “hanging chads”). And, I am probably in INOVA Fair Oaks Hospital getting a “bionic” right hip to match my three year old bionic left hip.

And Election Day 2012 is still more than a month away.

Update: From Second Presidential Debate on 16 October 2012: “Binders Full of Women” AND “War on Women.”

Update: From Third Presidential Debate on 22 October 2012: “Horses and Bayonets” AND “I Love Teachers.”

How times have changed!  Years ago, my pre-school age kids taught themselves how to read, write, count, and many other things by watching Big Bird and his friends on Sesame Street on the local PBS channel.  Now, in some circles, PBS is viewed, among other things, as an expensive luxury not worthy of the miniscule subsidy it gets from Uncle Sam.

Kids who grew up in Southwestern Pennsylvania during the 1950s and beyond also had the benefit of watching Mr. Rogers, whose children’s show was a mainstay of the Pittsburgh, PA PBS channel.  I wonder what Fred Rogers, were he still with us, would have to say about the potential loss of federal funding for PBS?